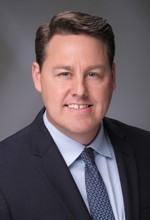 Joel F. England currently serves as Chief Executive Officer and Executive Director of the State Bar of Arizona. The State Bar mission is to serve and protect the public with respect to the provision of legal services and access to justice. The Bar consists of over 25,000 legal professionals.
Before coming to the Bar, Joel was the Chief Judge of the Yavapai-Apache Nation, a federally recognized Indian Tribe in Camp Verde, Arizona. He was responsible for the overall administration of the Court and presided over criminal and civil cases as well as an alternative disposition Wellness Court.
Prior to being a judge, he served for over 21 years in the United States Air Force. He held a variety of positions, including service as a prosecutor, defense counsel and as a deployed combat operations attorney advising on the law of armed conflict. His final assignment included serving as the General Counsel for the 56th Fighter Wing at Luke Air Force Base. During his tenure at Luke Air Force Base, his team was recognized as the Arizona Corporate Counsel In-House Legal Department of the Year.
After graduating from Camp Verde High School, Joel attended the United States Air Force Academy. He graduated with academic distinction, finishing with a bachelor’s degree in Legal Studies. He holds a Juris Doctorate from the University of Arizona College of Law, where he graduated summa cum laude and served as the Editor-in-Chief of the Arizona Journal of International and Comparative Law. Joel is a member of the Arizona, California, and District of Columbia bars.